Cancel
230
4
false
Edit
This page is an example of the content and layout easily imported into Doc5 just by pasting it in.

From Wikipedia, the free encyclopedia
For other uses, see Weka (disambiguation).

The weka (also known as Maori hen or woodhen) (Gallirallus australis) is a flightless bird species of the rail family. It is endemic to New Zealand, where four subspecies are recognized. Weka are sturdy brown birds, about the size of a chicken. As omnivores, they feed mainly on invertebrates and fruit. Weka usually lay eggs between August and January; both sexes help to incubate.

The common name, "weka", is a M?ori word. The species was named Rallus australis by Anders Erikson Sparrman in 1789. Sparrman published the information in Museum Carlsonianum, four fascicules based on specimens collected while voyaging with Captain James Cook between 1772 and 1775.[5] Australis is Latin for "southern". Johann Georg Wagler's suggestion of the Ocydromus genus in 1830 to describe each weka as a species was generally adopted.[6]However, weka were later decided as a single species in the Gallirallus genus with four subspecies.

The buff weka (Gallirallus australis hectori)[7] formerly inhabited the eastern districts of the South Island but is now confined to Chatham Island and Pitt Island to which it was introduced in the early 1900s, and where they are widely hunted and eaten, being considered 'introduced'. Reintroduction into Canterbury has been unsuccessful so far but introductions to Stevensons Island (in Lake Wanaka in 2003) and from there to Pigeon and Pig Island (in Lake Wakatipu in 2005/2006) have been much more successful. It has a lighter overall colouring than the other subspecies. The North Island weka (Gallirallus australis greyi)[8] is represented by original populations in Northland and Poverty Bay, and by liberations elsewhere from that stock. This subspecies differs in its greyer underparts, and brown rather than reddish coloured legs.[9] 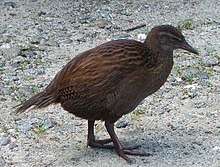 The western weka (Gallirallus australis australis)[10] is found mainly in the northern and western regions of the South Island from Nelson to Fiordland. Distinguished by dark red-brown and black streaking on the breast, the western weka has two distinct colour phases, that of the southernmost range showing a greater degree of black. The Stewart Island weka (Gallirallus australis scotti) is smaller than the other subspecies and, like the western weka, has two colour phases; a chestnut form - similar to the chestnut-phase western weka - and a black phase which is not as dark as the black western weka. The population is confined to Stewart Island/Rakiura and outliers, and to Kapiti Island to which it was introduced.[9]

Weka occupy areas such as forests, sub-alpine grassland, sand dunes, rocky shores and modified semi-urban environments. They are omnivorous, with a diet comprising 30% animal foods and 70% plant foods. Animal foods include earthworms, larvae, beetles, weta, ants, grass grubs, slugs, snails, insect eggs, slaters, frogs, spiders, rats, mice, and small birds. Plant foods include leaves, grass, berries and seeds. Weka are important in the bush as seed dispersers, distributing seeds too large for smaller berry-eating birds.[11] Where the weka is relatively common, their furtive curiosity leads them to search around houses and camps for food scraps, or anything unfamiliar and transportable.[3]

The breeding season varies, but when food is plentiful, weka can raise up to four broods throughout the whole year. Nests are made on the ground under the cover of thick vegetation, and built by making grass (or similar material) into a bowl to hold about four eggs. On average, female weka lay three creamy or pinkish eggs blotched with brown and mauve. Both sexes incubate. The chicks hatch after a month, and are fed by both parents until fully grown between six and ten weeks.[3][4]

Weka are classed as a vulnerable species. The Department of Conservation's weka recovery plan, approved in 1999, aims to improve the conservation status of threatened weka, clarify the status of data deficient weka, maintain the non-threatened status of other weka, and eventually restore all weka to their traditional ranges as a significant component of the ecosystems.[12]

Weka are problematic in conservation; some subspecies are threatened, but have been a problem to other threatened wildlife on offshore islands, especially when introduced to an island that they would not naturally inhabit.[13] Weka are unable to withstand the current pressures faced in both the North Island and South Island. However, they can be very productive in good conditions and high food availability. Year-round breeding has been recorded at several sites with up to 14 young produced in a year. Weka populations can persist in highly modified habitats, but they have disappeared from huge areas of their former range, suggesting that they can adapt to a wide range of conditions but are particularly vulnerable to threats.[12]

The Department of Conservation identifies eight main threats to weka. Predation by ferrets, cats, and dogs are a threat to adult weka;[14] stoats and ferrets are a threat to chicks; stoats and rats are a threat to eggs. It faces competition with introduced species for fruits and invertebrates, and suffers from the impact browsers have on forest composition and regeneration. Habitat depletion is caused by the modification and degradation of forests and wetlands. Diseases andparasites have been associated with population declines, although little is known. Drought has been implicated in the disappearance of weka from some areas. In some regions, motor vehicles cause a significant amount of roadkill death. Pest control operations sometimes kill weka, as they have ground foraging habits vulnerable to poison baits, and traps are laid in a way that weka can reach. Genetic diversity can be lost during the transmission of genes through generations, affecting isolated populations.[15]

Weka are significant to some M?ori iwi who admire their curiosity and feisty, bold personality, traits which have led to them being relatively easy to catch. Weka were used by the M?ori as a source of food, perfume, oil to treat inflammations, feathers in clothing[16] and lures to catch dogs. Early European explorers and settlers frequently encountered and utilised Weka; they were called "bush hens".[17]

Tales of weka stealing shiny items and bags of sugar are part of New Zealand folklore.

You are viewing version #4 of a page titled Weka. The page owner is Mike McMurray and the last changes were made by Anonymous Sep 20, 2017 3:27pm. There are 2033 words in this revision and it has been viewed 3223 times.

You may Edit this page.

Specific permissions are applying to users as listed below.